A Brief History of Bank of New Madrid 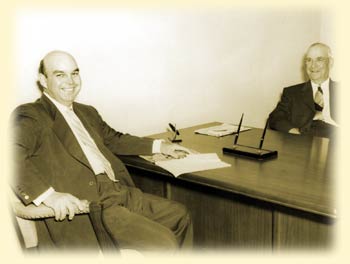 Bank of New Madrid was incorporated under the laws of Missouri and a Certificate of Incorporation issued August 15, 1934 authorizing the bank to commence business. There were five members of the original board of directors: Sam L. Hunter, Sr., R. H. Bierschwal, Vincent H. Rost, W. P. Hunter and J. P. Hunter. Sam L. Hunter, Sr. was chairman of the board and also the first president of the bank. At the time of inception, Bank of New Madrid had approximately five employees with manual typewriters, adding machines and posting machines to assist in the daily work. Electric typewriters and adding machines, as well as proof machines and photo copiers, came much later. The latest addition, computer and data processing equipment as well as electronic handling of transactions, revolutionized the banking industry and the entire business world.

In November, 1945 Sam L. Hunter, Jr. joined the bank as Vice President, and in 1962 he was promoted to president after his father retired, a position he held until 1995 when health problems surfaced a few years before his death in November, 1999. Sam L. Hunter, Jr.’s banking career spanned a period of more than fifty years and he initiated many of the changes that took place and affected the area during those years.

Throughout the years, bank personnel gradually increased and culminated to over forty employees in 2006, however, in recent years, bank personnel has decreased to just over 30 employees at all three locations. The bank does not perceive this as a negative aspect but rather as a positive step guided by the world of technology. The bank has found if an employee leaves, it may not always be necessary to replace the employee. With the aid of technology it is developing ways to become more efficient with less people.

The banking industry is consistently raising the bar. To keep ahead of the bar it is key to stay up-to-date with the leading edge of change. Bank of New Madrid makes every effort to encourage and promote growth and progress within the banking industry in the hopes of offering its customers the best banking experience, but at the same time remembering its small town bank motto: A Real Community Bank: “Large Enough to Serve You, Strong Enough to Protect You and Small Enough to Know You.”